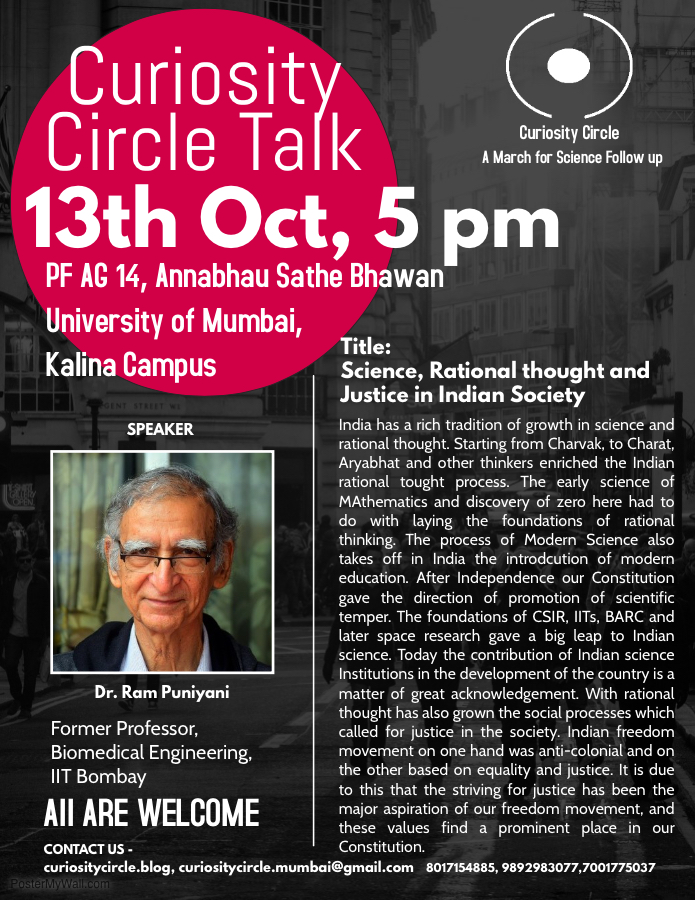 Dear all,
Curiosity Circle continues with its series of engaging talks with this month’s public talk by Dr. Ram Puniyani on “Science, Rational thought and Justice in Indian Society”. We look forward to your presence.

Curiosity Circle, a gathering of the public, meets once every month, on second Saturday, to engage with  an eminent speaker on an idea,  to understand how scientific exploration helps us to resolve some of the basic questions of society.

What is the talk on:

India has a rich tradition of growth in science and rational thought. Starting from Charvak, to Charat, Aryabhat and other thinkers enriched the Indian rational tought process. The early science of MAthematics and discovery of zero here had to do with laying the foundations of rational thinking. The process of Modern Science also takes off in India the introdcution of modern education. After Independence our Constitution gave the direction of promotion of scientific temper. The foundations of CSIR, IITs, BARC and later space research gave a big leap to Indian science.

Today the contribution of Indian science Institutions in the development of the country is a matter of great acknowledgement. With rational thought has also grown the social processes which called for justice in the society. Gautam Buddha who called for equality was talking of rational thought. SImilarly Ambedkar and Nehru, the major figures to call for justice in society based their understanding on rational thinking. Indian freedom movement on one hand was anti-colonial and on the other based on equality and justice. It is due to this that the striving for justice has been the major aspiration of our freedom movement, and these values find a prominent place in our Constitution.

Who is the Speaker:

Dr. Ram Puniyani (born 25 August 1945) is a former professor of biomedical engineering and former senior medical officer affiliated with the Indian Institute of Technology-Bombay. HGe began his medical career in 1973 and served IIT in various capacities for 27 years, beginning 1977. In December 2004, he took voluntary retirement to work full-time for communal harmony in India. He is involved with human rights activities, communal harmony and initiatives to oppose the rising tide of fundamentalism in India. He is associated with the organisations All-India Secular Forum, Centre for Study of Society and Secularism and ANHAD. In 2006, he was awarded the Indira Gandhi Award for National Integration.

The talk would be followed by another 45 mins of discussion.

We would appreciate your presence for the talk and would be glad if you could invite others too who would take interest to participate in such talks. Let us gather together to question our long held answers.

Prof. Dani to speak on 13th January 2018 at Homi Bhabha Centre for Science Education at 5.30pm IST.  All are welcome.